Chinese beer statistics is the subject of today’s article. China has a maturing beer market and looking at the stats can give us insight to why this is the case. Let’s take look at our snap shot of Chinese beer market through our top 5 facts.

The Chinese beer statistics below are from 2018 (takes time to collate stats). However when combined with trends over the last 10 years. We can start to see how the future of the Chinese beer market is going to change in 2020 and beyond.

Chinese Beer Statistics #1: US$41 – Is The Amount the Average Person Spent on Beer in China in 2018

We covered this in the our article about the Chinese beer market a few days ago. But let’s put some perspective to this. Icelanders spend a whopping US$708 per year on beer! Whilst some other countries such as USA (US$347), UK (US$383), Australia (US$504) and New Zealand (US$493) also spend way more. 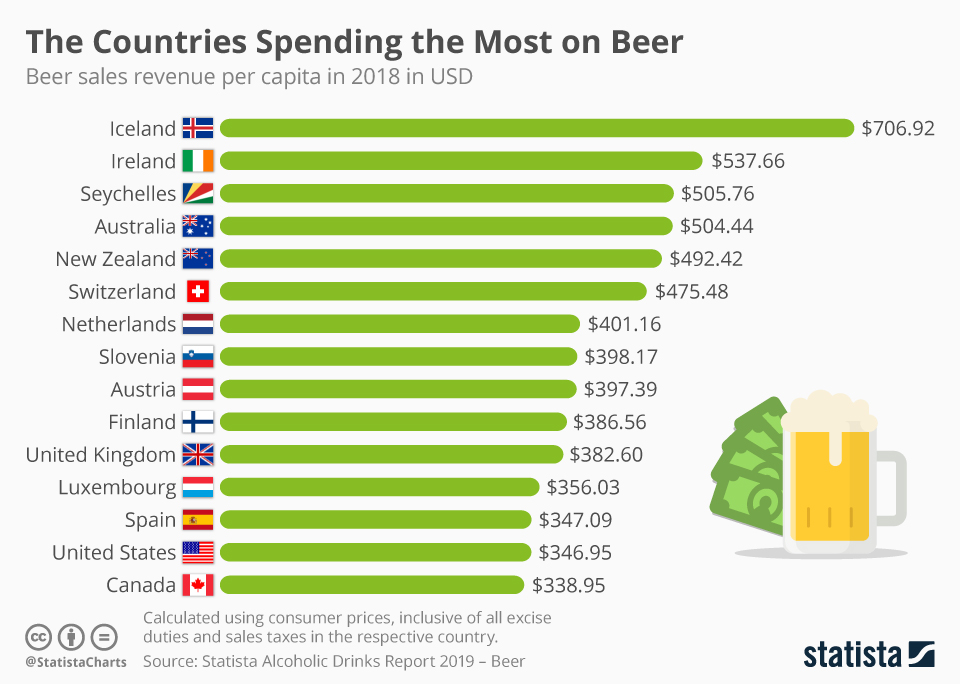 You will find more infographics at Statista

There are of course some caveats such as China has less disposable income per capita than in the West. Also the national drink baijiu (a strong rice wine) is still extremely popular especially among the older generations. So the amount Chinese spend on alcohol per capita is higher.

However, there is a trend towards drinking local craft/imported beer among young high earning professionals in China. I believe we will see the figure of US$41 increase in the coming years. As these higher priced premium beers take a larger market share.

The average spend on beer per annum is a good indicator of where the market is heading. If the figure continues to rise year on year it would indicate the following:

-> Locally produced Chinese craft/Imported beer is still being drank by the current younger generation as they get older.

-> The current national drink baijiu sales decrease. As beer takes a lager market share as the older generation pass on.

-> That a similar trend to the US has taken place where local craft beer (higher priced) takes a larger market share in China.

With beer markets elsewhere such as the US showing continued decline; a 0.6% growth rate for China is positive. The US has recorded it sixth consecutive of decline in beer sales in 2019. The net effect is that the big breweries are now concentrating efforts in China as their sales decline in mature beer markets.

It would indicate the big boys are confident that the premium Chinese Beer market will continue to grow. Carlsberg also got in on the act as well. They invested in Beijing based Jing-A Brewery in March 2019. It appears the Chinese beer market is undergoing transformation with AB InBev and Carlsberg priming themselves to take advantage.

The big players are branching out, hoping to be at the forefront of the “premiumisation” of the Chinese beer market. Where rising disposable incomes and a young urbane demographic opting for craft beers are changing the Chinese beer landscape.

This is good news for smaller local craft beer producers too. Who are using high quality ingredients to produce niche products that the big boys cannot (due to their size).

These Chinese craft breweries can produce small volumes of new and unique and beers to capture the sales of the young demographic seeking something new, fresh and “social media postable”.

Chinese Beer Statistics #3: 40% of the Beer Consumed in China in 2017 was Imported

Here is one of the Chinese beer statistics that makes little sense considering the table below. Where it seems only Chinese people 8% of people preferred foreign brands when it came to beer. What does it indicate?

Well it seems that maybe status or “face” maybe one small explanation. Chinese people like to be seen as “wealthy” in China; so drinking foreign imported brands or local higher price craft beer is seen as a status symbol. Although this isn’t the whole story there are a number of factors.

The younger professionals in the cities are more outward looking than the traditional populace in the countryside. They have more curiosity so looking for new ways to spend their disposable income. In addition they like socializing. The net effect is local craft and imported beer is being drank in the large cities such as Beijing, Shanghai and Guangzhou among younger peer groups.

When we combine that with the 2nd of our Chinese beer statistics (O.6% growth), we believe the premium beer market in China is healthy. Good news for local Chinese craft breweries able to take advantage of this trend; brewing new and unique beers in small volumes to create a buzz locally.

Chinese Beer Statistics #4: China had 20 Registered Microbreweries in 2010 by 2017 that Figure had Risen to 80

This is my favorite of the Chinese beer statistics. Because as of today 27th March 2020, I would estimate that the number of microbreweries in China is at least in to the 300’s if not higher.

I will endeavor to find a more accurate figures; However my experience is craft breweries are popping everywhere. Even Kunming a provincial city in Yunnan has around 7 craft breweries of various sizes with more planned this year.

This would back up the other Chinese beer statistics we’ve already discussed but project an even more positive outlook. It seems the craft revolution is spreading. It isn’t just the main cities where there is a thirst for unique brews. We are seeing third and fourth tier cities have their own breweries and a regular customer base.

The Growth in the Chinese Craft Beer Market

It is fair to say China is more outward looking now now than in 2010 . Chinese people are travelling abroad in ever greater numbers; be it for pleasure, business or studying. They’re trying craft beer in countries in Europe and the US; getting a taste for them, so want to drink similar when they get back to China.

It has led to people; Chinese/ex-pats residing in China setting up their own breweries. Remember in 2010 they were only 20 craft breweries. For many it was hard to get craft beer locally. If you can’t buy it…well you make it yourself. And that is what people did and are doing in China in ever greater numbers.

At this point we should talk about “the big daddy” Master Gao who is a Chinese craft beer pioneer. He traveled to the US and developed a taste for craft beer. On getting back to China the beers he wanted to drink weren’t available locally so Master Gao brewed his own to satisfy his thirst. He set up one of China’s first craft breweries (the first Chinese person to do so) and now ships his beer to the US.

Chinese craft breweries are being recognized on the international stage too; with Boxing Cat Brewery and Great Leap winning awards at The World Beer Cup. The overall quality of craft beer is improving and a thirst for them is growing. So the future looks bright for any craft brewery in China that understands the market demand and can supply it.

Chinese Beer Statistics #5: Tsingtao Has the Biggest Share of the Urban Beer Market in China

This is the counter balance to what has come before. In China; craft beer producers have a tiny proportion of the overall Chinese beer market. Way below the 13% market share craft breweries have in the US. Tsingtao accounted for 30.7% of industry revenues with Snow second with a 20.8% share in China.

Behind was AB InBev at 17% , then Yanjing at 7.8% and Carlsberg at 2.8% (data from EastWest Bank). As we wrote in our article about “AB InBev and the craft beer sector;” AB InBev are in pole position to take advantage of the changing Chinese beer landscape.

With their disruptive campaign to corner the Chinese craft beer market through local craft brewery acquisition and pushing their premium beer brands through national advertising campaigns. Also let’s not also forget Carlsberg and their investment in Beijing craft brewery Jing-A.

At Asian Beer Network we hope that the premium beer market does expand; as the big boys predict. As it will allow small Chinese craft breweries who understand the market to grow by meeting consumers needs. Producing unique brews a more curious, open and well traveled China thirsts for.

Neil is a brewer with 25 years international brewing experience. Based out of China (first came in 2010) he works as a brewing consultant helping brewers with their projects and brewing processes. To find out what services Neil can provide your brewery please click here. If you'd like to contact Neil you can email at neil@asianbeernetwork.com.
0 0 votes
Article Rating
Subscribe
Login

This site uses Akismet to reduce spam. Learn how your comment data is processed.

Sign up to get our FREE guide, by simply filling in the form below...

You have successfully signed up. Please wait for our follow-up email to to access the guide. If not in your inbox please check your junk folder.